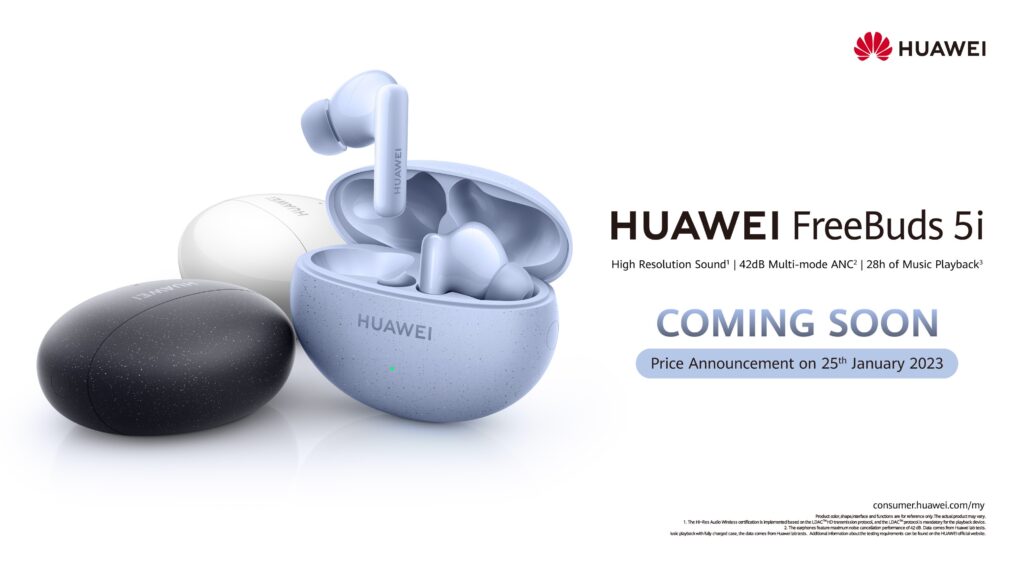 Huawei Malaysia has announced that they will be bringing in their midrange FreeBuds 5i wireless earbuds to Malaysia this coming 25th January 2023 though they did not mention how much it will cost.

What are the Huawei FreeBuds 5i

The Huawei FreeBuds 5i are intended as a more affordable mainstream model to their flagship FreeBuds Pro 2 but still retain plenty of the features of its higher end sibling including Hi-Res audio certification, dual-mic active noise cancellation up to 42dB, easy pairing and seamless swapping between two different devices like your phone and laptop. In terms of endurance, the FreeBuds 5i offers a rated 28 hours of battery life inclusive of the charging case. Fortunately charging it is swift as a 15-minute charge gets you a good 4 hours of playback time.

A provided press image also showed its three potential colourways with your choice of either black white or a light muted looking blue. The only thing missing perhaps is how much it will cost when it launches in Malaysia near the end of the month on 25th January 2023.

On that note, Huawei Malaysia wants you lot out there to guess just how much it will cost and are hosting a ‘Guess and Win contest that kicks off starting from today until 24th January 2023 with three pairs of FreeBuds 5i given to three lucky winners.

According to Huawei Malaysia, no purchase is required to participate in the competition and all that is needed is to merely guess how much the FreeBuds 5i will cost in Malaysia. To participate, you simply need to:

Huawei Malaysia has officially announced the price of the FreeBuds 5i and it officially retails for RM399 in Malaysia though early birds can acquire it at a special price of RM339 for a very limited time. You can check out more details here and our Huawei FreeBuds 5i review for more details on how it handles itself in the field.