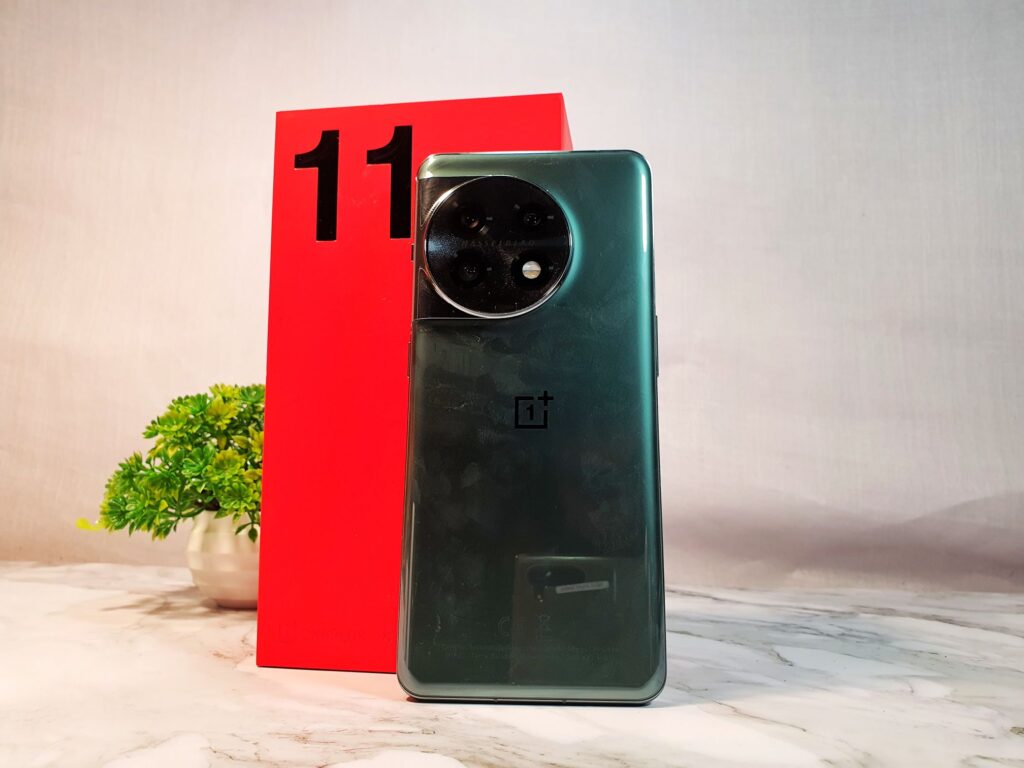 The latest fruit of OnePlus and Hasselblad’s collaboration, the powerful OnePlus 11 aims to be the titular flagship of the brand and is one of the first phones in Malaysia to use the latest Snapdragon 8 Gen 2 processor.

We managed to get our hands on an early retail unit for field testing and managed to put it through its paces. Here’s our OnePlus 11 unboxing and first impressions of their latest uber phone that is now available for preorder in Malaysia.

OnePlus 11 Unboxing and First Impressions – What’s in the Box

In keeping with the original OnePlus ethos of offering exceptional power and design, the OnePlus 11 is a 5G capable flagship-grade phone that is intended to go toe to toe with any other flagship phone.

The packaging comes in a rather prosperous looking bright red hue with the OnePlus insignia emblazoned on the top. Popping the lid open reveals a cardboard insert which held a rather cute sticker sheet along with some of the obligatory warranty paperwork. Hidden just beneath the cardboard insert is the OnePlus 11 itself wrapped in a protective sheet of plastic nestled in a cardboard tray. Just beneath it is a 100W charger with a UK-style plug as well as a distinctive red charging cable.

As far as unboxings go, our OnePlus 11 unboxing is off to a good start as they’ve bundled a sweet bonus with the phone. Seeing as chargers, more so fast chargers that can take full advantage of a given phone’s actual fast charging rate are rarely bundled with phones these days, having it bundled with the OnePlus 11 is a huge bonus.

OnePlus has also done a solid by applying a screen protector on the phone to keep the touchscreen pristine until you acquire your own. As it stands, it’s a pretty fair assortment of gear. While it would have been nice to have, there’s no casing bundled with the phone so you’ll have to acquire one on your own. Even so, it’s not a deal breaker.

OnePlus 11 Unboxing and First Impressions – How does the OnePlus 11 feel like?

There are certain expectations expected of a flagship phone unboxing from the silent, weighty expectation as the weighted box smoothly slides open, the intricate, almost precise packing of every accessory within revealed to the light like a Christmas morning present unwrapped.

Ultimately, you get the pièce de résistance – the phone itself nestled within waiting to be turned on – our OnePlus 11 unboxing experience was all this and a bit more on account of the generous inclusion of a charger in the box.

When held, the OnePlus 11 feels every bit like a flagship phone with its even heft and modest 205g carry weight that primarily consists of aluminium and Corning Gorilla Glass Victus on the front and back. They’ve paid special attention to the backplate and front with both curving together on the sides and corners to make it easier to wield. 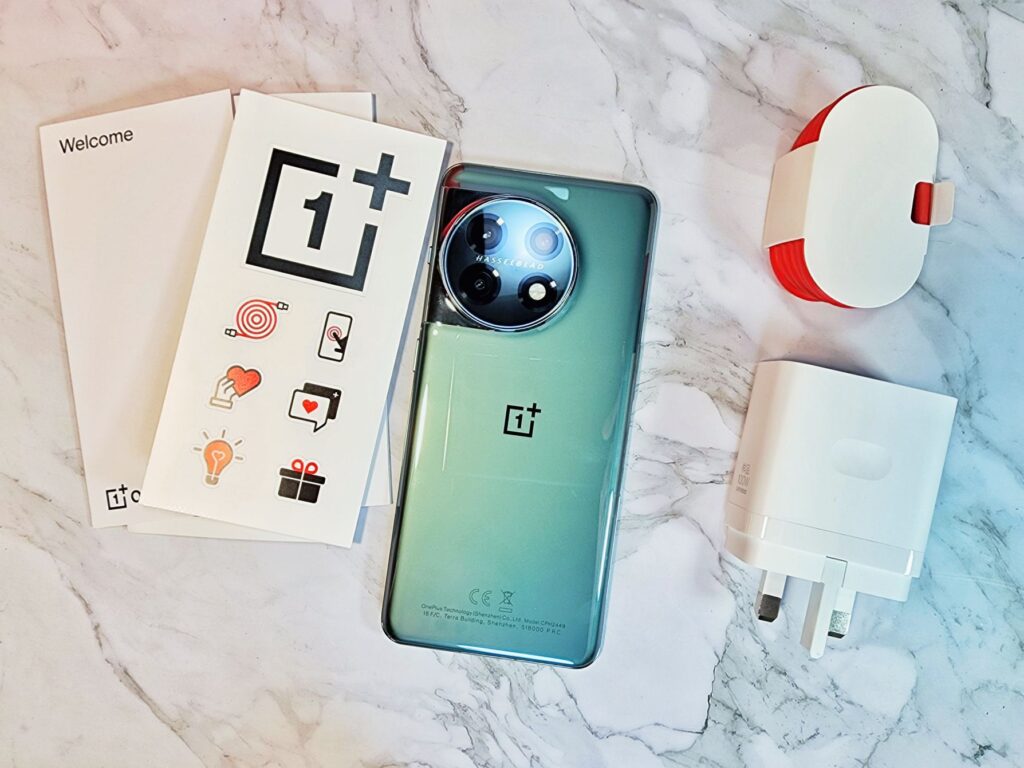 The backplate itself is available in a shade of matte black or, in the case of our OnePlus 11 unboxing unit, a shade of what they call Eternal Green which works out to a mirrored, iridescent green finish that shines in the light.

Rather than the chromatic or unusual photo luminescent colourways that are typically used as gimmicks, the Eternal Green finish looks  classy to the eye and feels cool to the touch. Unfortunately, it’s also a fingerprint magnet.

Dominating the rear backplate and taking centre stage is the phone’s off-centre large rounded camera housing hewn from stainless steel that houses its triple camera array and an LED flash along with the Hasselblad brand emblazoned across it.

While it does lend the OnePlus 11 a very distinctive silhouette that no other phone has at present, the housing itself is chunky and large, lending it a look somewhat akin to an abstract representation of a camera. 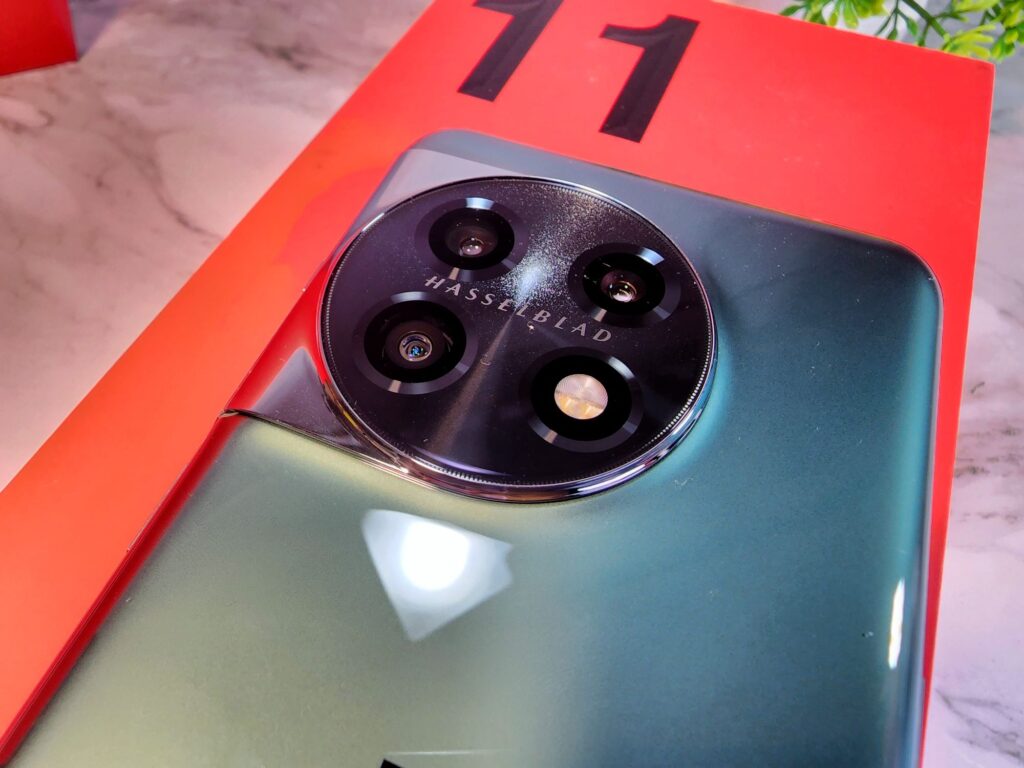 In keeping with other flagship phones, the OnePlus 11 also leverages AI for better shots with an AI Highlight Video Mode to capture better video in lower light environments to reduce blur, improve contrast and detail.

The camera also leverages Hasselblad’s experience with cameras to offer more natural colours when taking shots along with the option to capture images in 10-bit colour in HEIF format with the trade-off of only being viewable on compatible devices.

The left of the phone features a volume rocker while the right has a power button and the brand’s signature alert slider to toggle between ‘silent’, ‘vibrate’ and ‘ring’ modes for incoming calls. 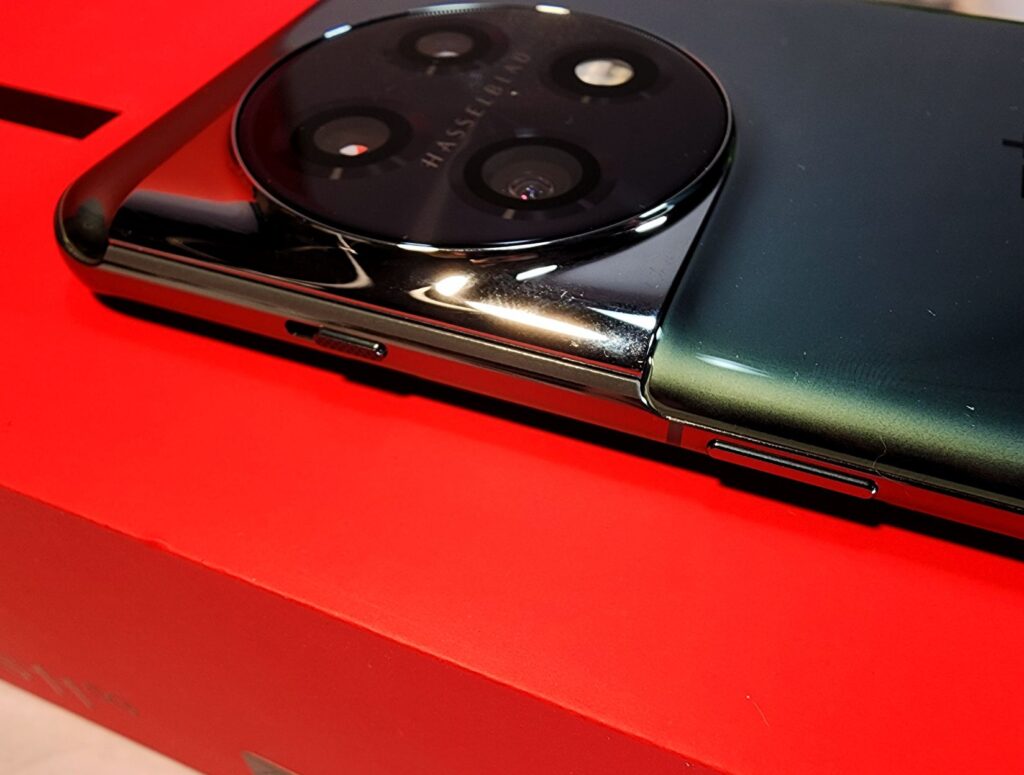 On the base of the OnePlus 11 is the customary USB-C charging port though it’s oddly enough still the USB 2.0 standard which affects data transfer speeds if you’re aiming to connect and transfer large files to another device by a cable though this is easily circumvented by just uploading to and downloading from a cloud drive. Flanking the USB-C port is a SIM card port and a speaker grille with the other speaker emplaced at the top of the display. 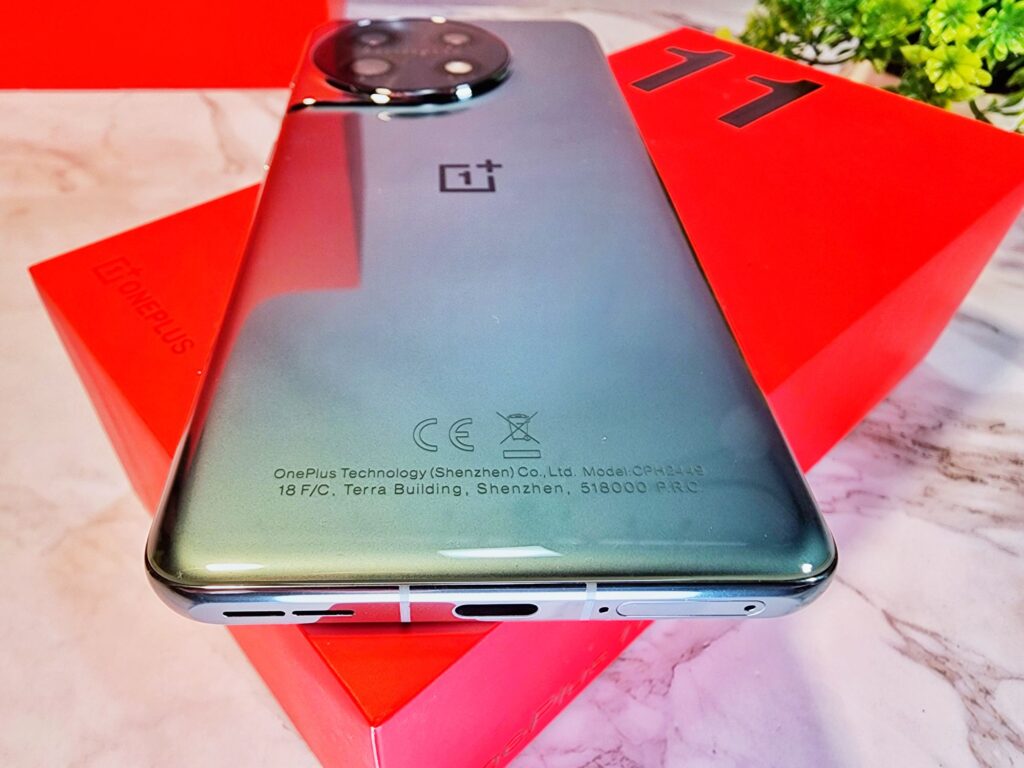 In practical terms, the display will ramp the refresh rate down to as low as 1Hz or 10Hz if you’re reading static content like an e-book or web page but ramp it up to 120Hz if you’re gaming on selected games.

The display also has Dolby Vision HDR and supports HDR10+ content too. Placed at the bottom quadrant of the phone is a fingerprint reader to unlock the phone. Emplaced off-centre in the corner is a 16MP F/2.45 fixed focus selfie camera that uses a Sony IMX471 sensor for mug shots, 1080p videos and video calls.

The centrepiece of what makes the OnePlus phones such a treasured acquisition is their emphasis on acquiring specifications as close to the cutting edge as possible along with their clean and intuitive OxygenOS. Our OnePlus 11 unboxing sample continues that fine tradition in a suitable respectable fashion.

On top of the aforementioned 6.7-inch 120Hz 2K AMOLED display, the OnePlus 11 has the latest Snapdragon 8 Gen 2 processor.

While the phone does come in a variety of RAM and storage configurations, our OnePlus 11 unboxing sample came with a generous 16GB of UFS 4.0 RAM that can be further extended with up to a whopping 12GB of virtual RAM paired with 256GB of onboard storage. The virtual RAM, or RAM-Vita as OnePlus calls it is assigned off the phone’s storage in 4GB, 8GB and 12GB increments. At the time of writing, OnePlus has yet to finalise the RAM, storage configurations that will launch in Malaysia.

Naturally, 5G comes as standard along with the latest WiFi 6 and Bluetooth 5.2 connectivity. Keeping it charged is a rather unique 5,000mAh battery split into two 2,500mAh cells for faster charging along with 100W SuperVOOC fast charging support. On paper, you’re able to juice it from dead zero to 100% in just 25 minutes which is an impressive figure by any measure of the word. 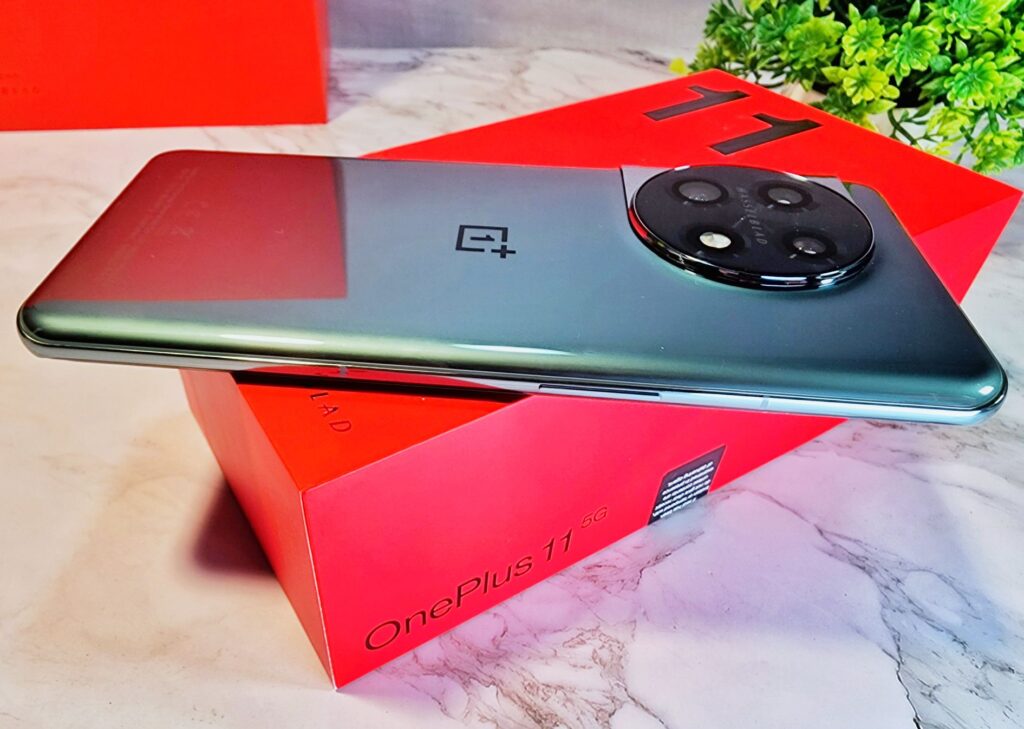 This is an impressive set of hardware indeed and lets it tackle almost anything thrown at it. Once we’ve put it through its paces, we’ll share our findings in a full OnePlus 11 review.

At present there’s no official price tag for the OnePlus 11 in Malaysia nor an exact launch date yet and which RAM, storage configurations will arrive locally but we’ll keep you posted! For more details on the OnePlus 11, tune into their official page at https://www.oneplus.com/my