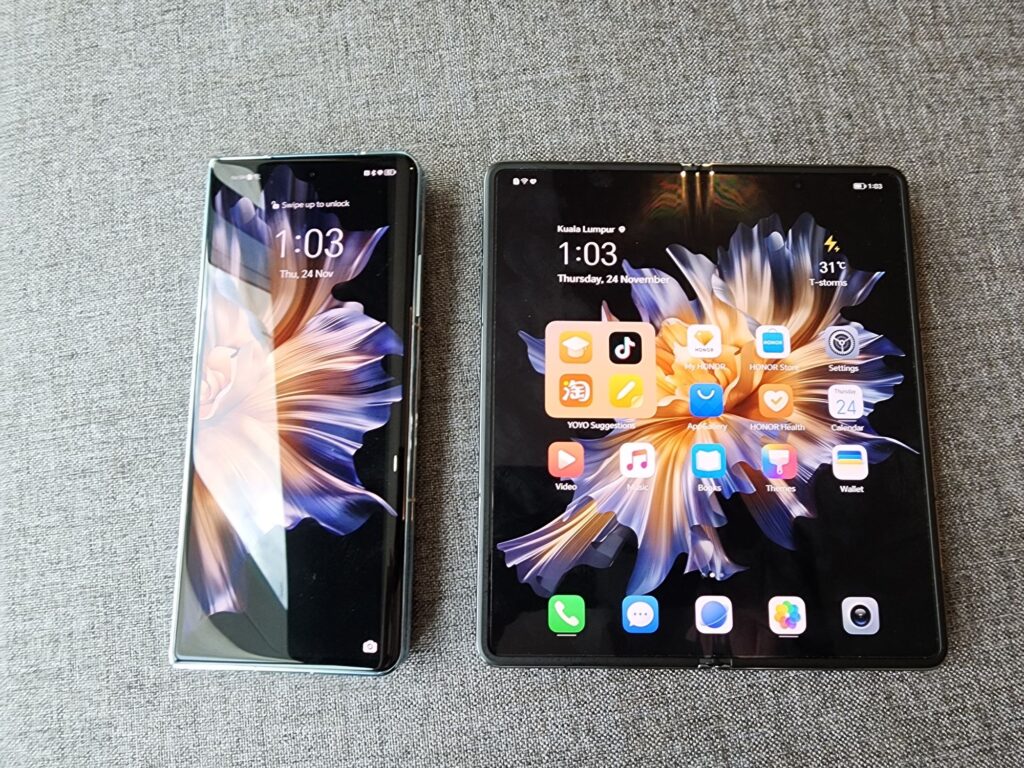 When it comes to making foldable phones, the new Honor Magic Vs that just debuted in China a few days ago isn’t their first rodeo. Technically speaking, it’s their second after the debut of the Honor V in 2021 though that was intended solely for sale in China though the Honor Magic Vs, pronounced ‘Vee S’ is slated for international deployment next year though the exact timing and which countries get it is still up in the air for now.

We managed to get our hands on a sample of the Honor Magic Vs that came with Google Mobile services installed and complete with a retail box courtesy of Honor Malaysia. Here’s a quick Honor Magic Vs first look where we go over its specifications and its design. 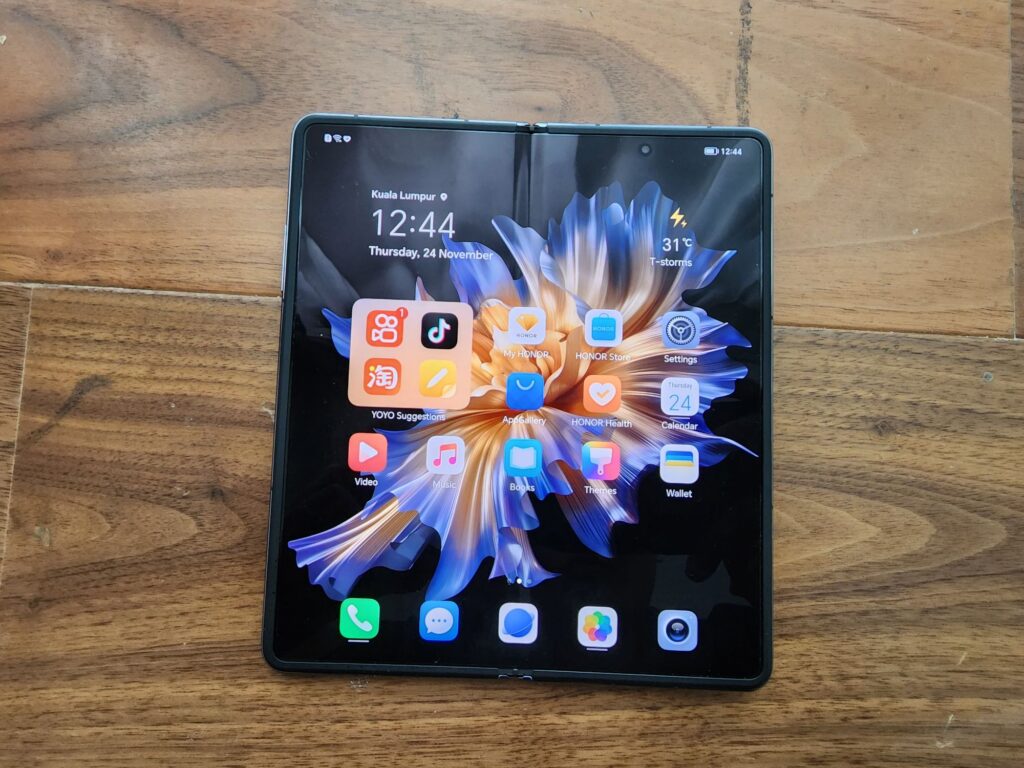 In terms of design, the Honor Magic Vs adopts the proven form factor of the Samsung Galaxy Z Fold series with an outer display and an inner folding display with some of their own refinements and tweaks to the design.

The design itself weighs a relatively light 261g on account of the inclusion of aerospace grade materials and a redesigned gearless design which uses just 4 moving parts versus its predecessor, the Magic V’s 92 moving parts.

This makes the spine of the Magic Vs much slimmer than other contemporary designs currently in service.  The tradeoff here, based on the engineering specs is that the Honor Magic Vs lacks any dust or water resistance. According to Honor, the design is rated for over 400,000 folds which vastly exceeds its service life, assuming a 100 folds per day it will last a decade of use. 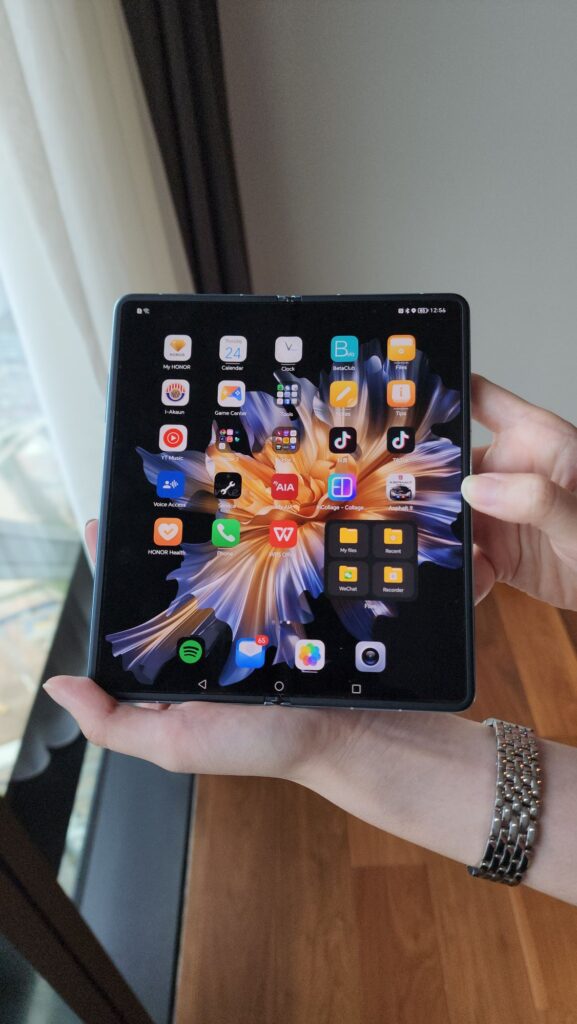 Flipping the Honor Vs open reveals the inner 7.9-inch OLED display which has 2,272 x 1,984 pixels resolution, a squarish 10:9 aspect ratio and, quaintly enough, a slightly slower 90Hz dynamic refresh rate along with a 100% DCI-P3 colour gamut. The corner hosts a punch hole for another 16MP F/2.45 selfie camera. At first blush, both the front and main displays looked vibrant with exceptionally smooth animations and sufficient clarity under daylight conditions. 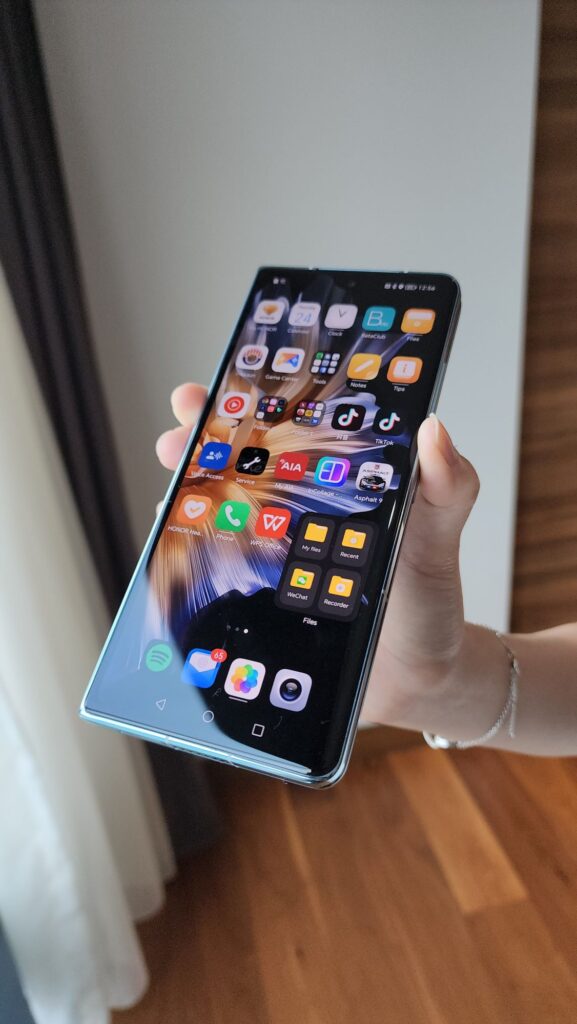 On the rear, the phone hosts a vertically oriented triple camera array which consists of a 54MP F/1.9 camera with a Sony IMX800 sensor. This is paired with a 50MP ultra wide angle camera and an 8MP 3x F/2.4 optical zoom camera. As far the official details go thus far, only the primary 54MP sensor has optical image stabilisation. Unfortunately we weren’t able to test the cameras during our short session with the phone but the rear triple cameras are rated for up to 4K@60fps video. 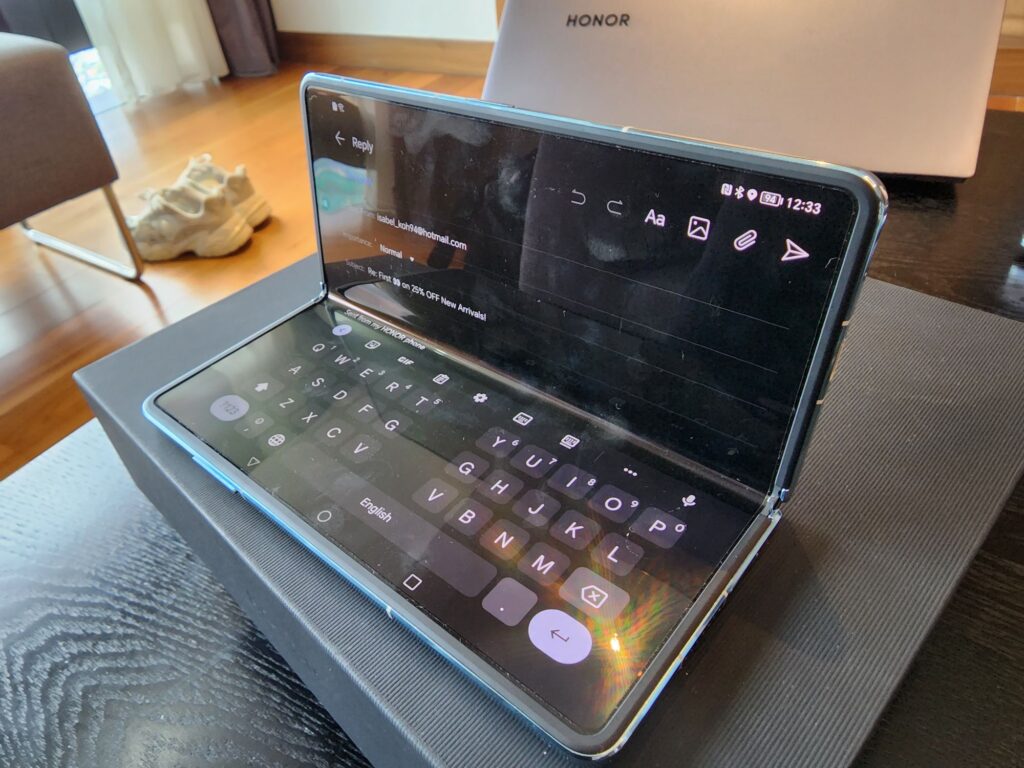 Under the hood, the phone runs Android 12 (upgradable to Android 13 next year) on a Snapdragon 8+ Gen 1 processor paired with either 8GB or 12GB RAM and either 256GB or 512GB of non-expandable storage. Other mod-cons include stereo speakers, WiFi 6 802.11ax and Bluetooth 5.1 with the phone powered by a 5,000mAh battery that also has 66W fast charging.

For our Honor Magic Vs first look experience, Honor presented the phone with its retail packaging that consisted of a 66W fast charger, a USB-C cable, a slim protective casing in colours matching the phone and the phone itself. The provision of a casing and the charger itself with the phone adds quite a bit of value to the phone. 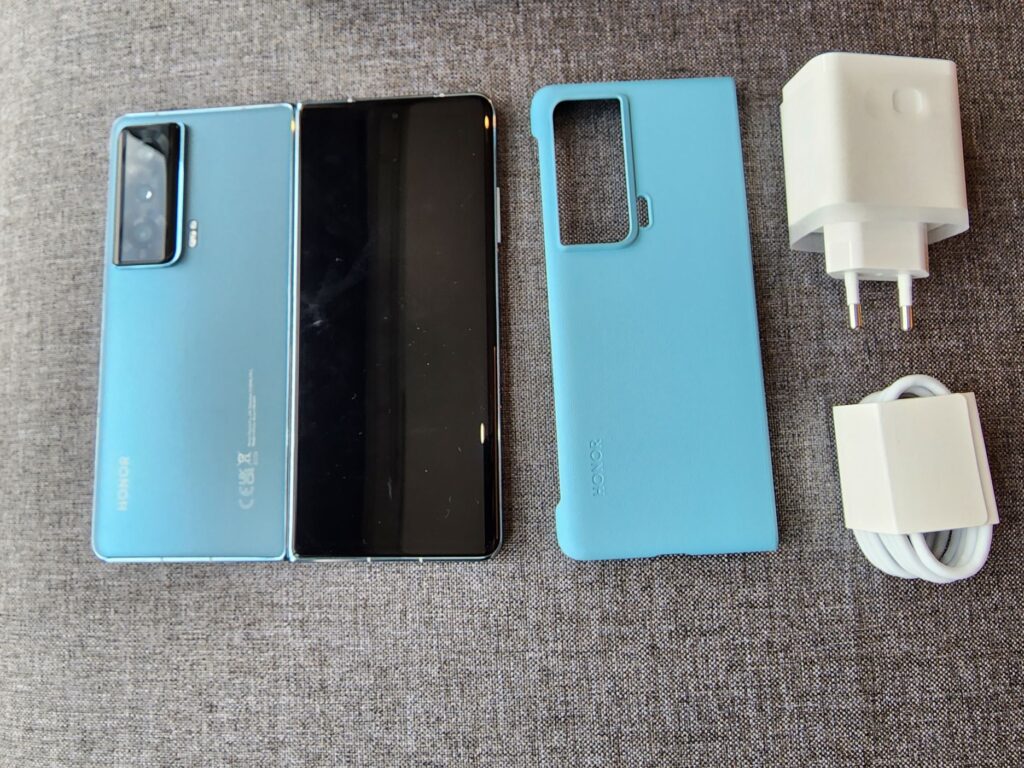 In our short time with the phone, they showcased both a black and blue colourway. The blue version has a paint job veering towards a metallic light blue with a semi-matte finish while the black version has a reflective finish.

When held, the Honor Magic Vs felt suitably premium and the phone when folded down is just 12.9mm thin on account of its slim hinge and 6.1mm thin when fully deployed. The slim dimensions of the phone also makes it more pocketable and lighter too. 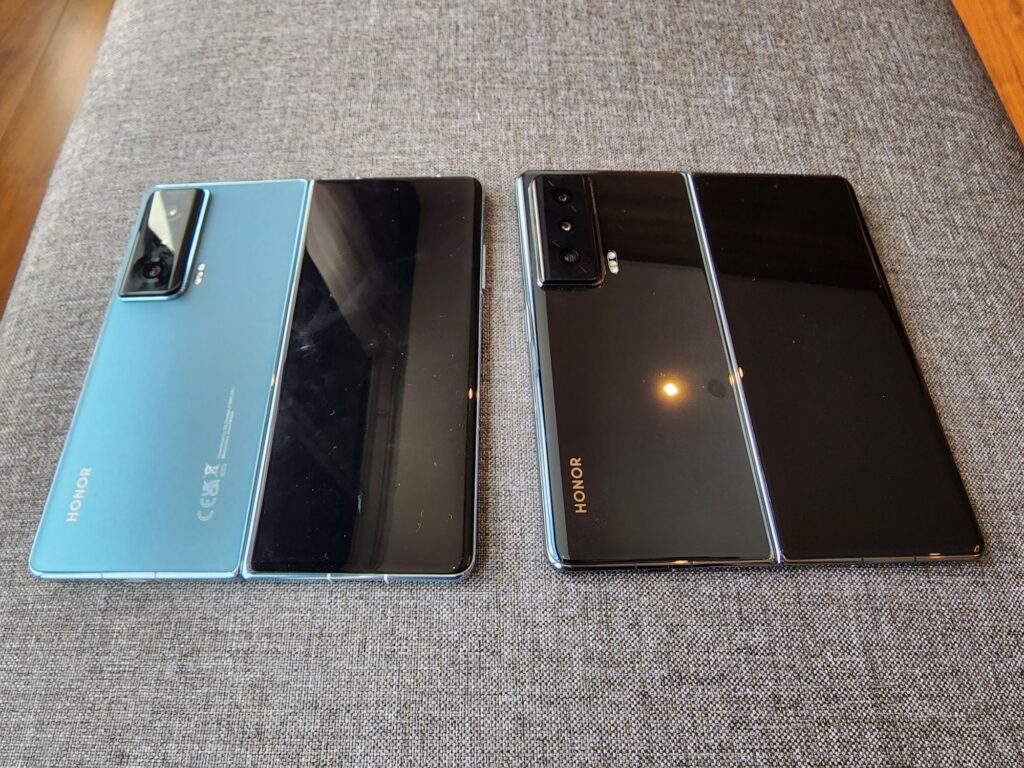 Of note with our Honor Magic Vs first look experience was the fact that its main folding display has a markedly reduced crease compared to other existing models in the market. While it is noticeable when viewed at certain angles, and to the touch, it’s much less obvious now.

We weren’t able to get a closer look at the firmware but Honor’s own Magic OS 7 has a number of multitasking features including the ability to record audio and transcribe it to their own note taking app along with dual screen multitasking and the ability to display two instances of selected apps onscreen.

Honor Magic Vs First Look – How much will it cost? 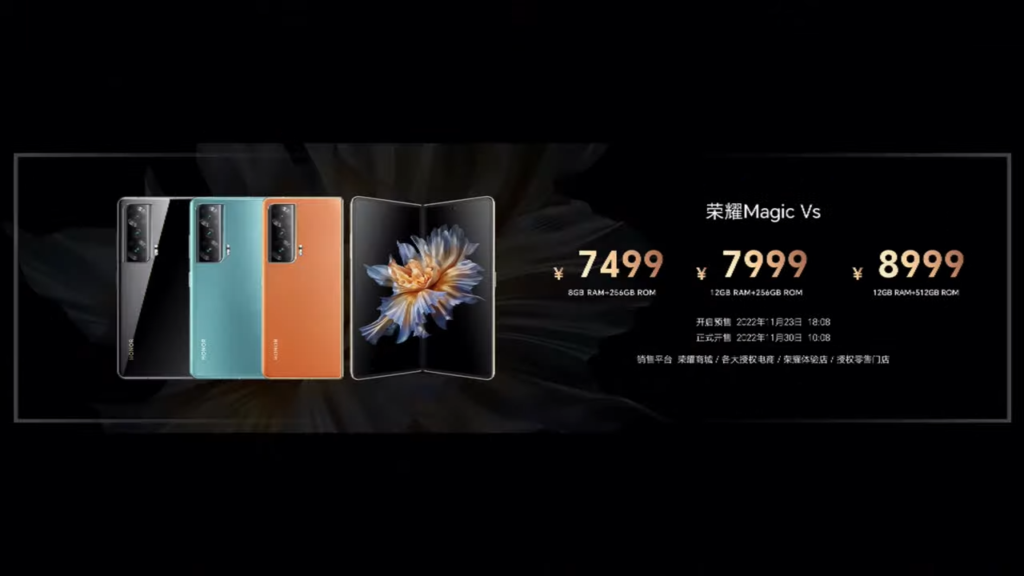 A rarer variant also exists with 16GB RAM and 512GB of storage that costs CNY10,888 (about RM7,036) but details are scarce. There’s no official details on its arrival in Malaysia as yet, its pricing, storage variants or colourways from Honor save for a launch date next year in 2023 but we’ll keep you posted. 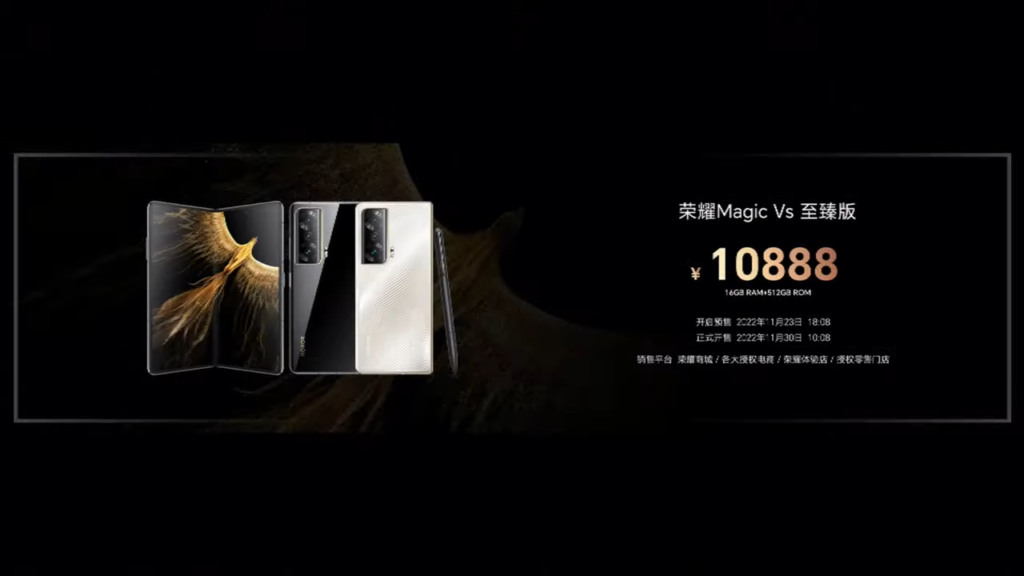