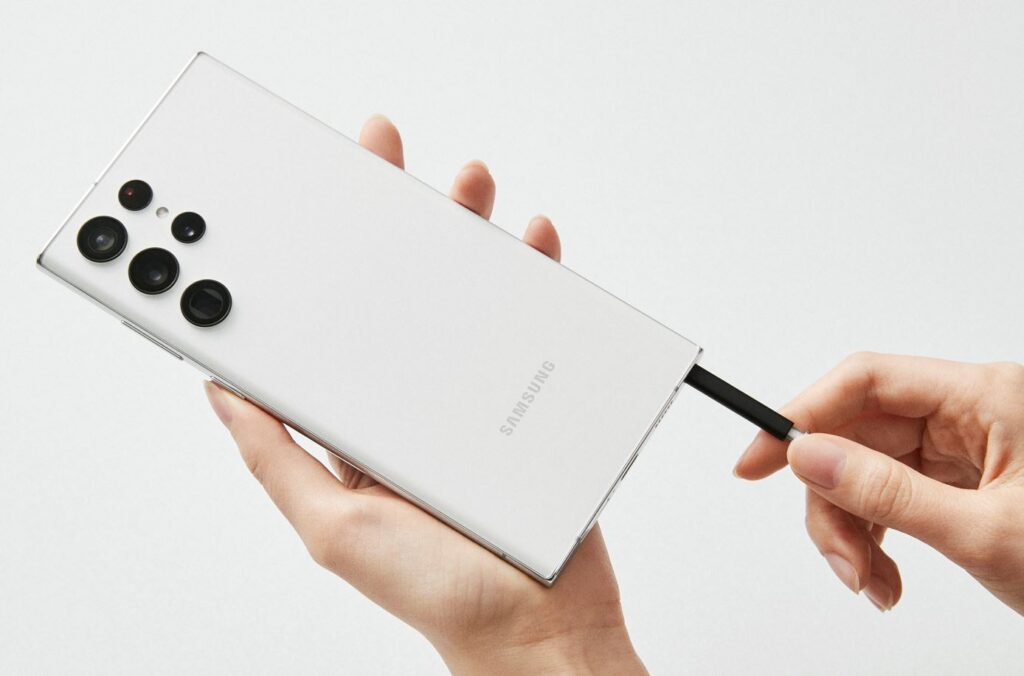 The centrepiece of Galaxy Unpacked 2022, the new Galaxy S22 series is spearheaded by the powerful Galaxy S22 Ultra that aims to be the best phone on the planet as it comes with hardware that embodies the veritable cutting edge of their engineering prowess and especially for long-time Galaxy Note series fans, an integrated S Pen stylus.

What is the Samsung Galaxy S22 Ultra?

Putting paid to longtime rumours running around on the grapevine, the Galaxy S22 Ultra is effectively a melding of the Galaxy S series and a Galaxy Note series phone in form and function. It’s also the first time, ever in the history of the brand that a Galaxy S series phone has an integrated S Pen stylus with a recessed stylus well embedded into the chassis. The prior Galaxy Z Fold3 had S Pen support but the stylus itself was a separate accessory. 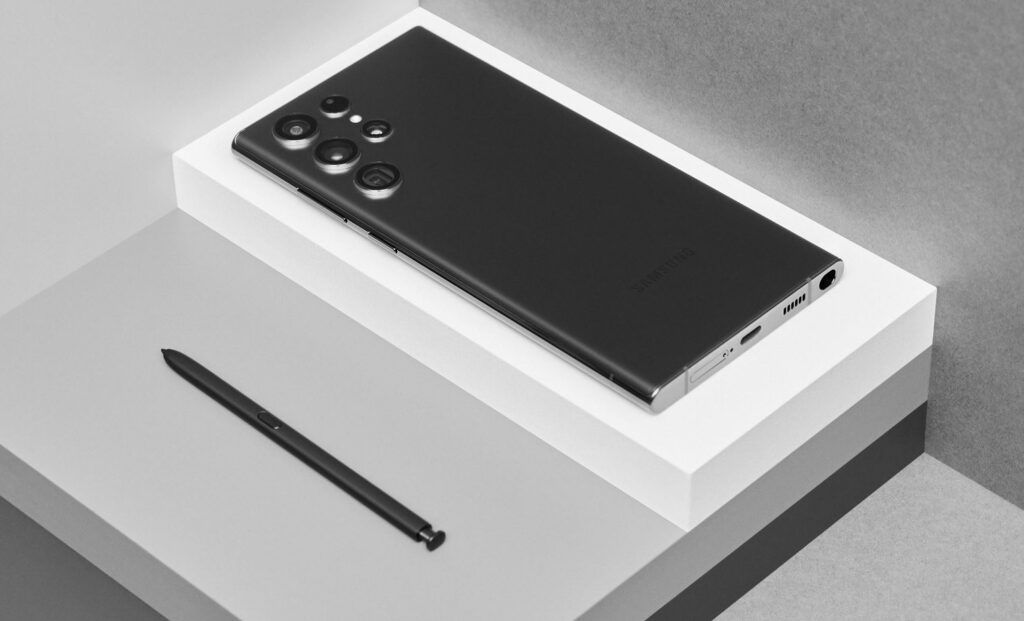 Aesthetics aside, the Galaxy S22 Ultra and its siblings also use the advanced, toughened Armor Aluminum material in its chassis.

This advanced material was first used in the Galaxy Z Fold3 and Z Flip3 released late last year that offer significantly enhanced resistance against drops, nicks and scratches. That’s not all, it’s also sheathed in tough Gorilla Glass Victus+, an enhanced version of standard Corning Gorilla Glass Victus on the display itself and the rear. The Galaxy S22 Ultra also has an IP68 dust and water resistance rating even with an exposed stylus silo which is quite a feat of engineering. 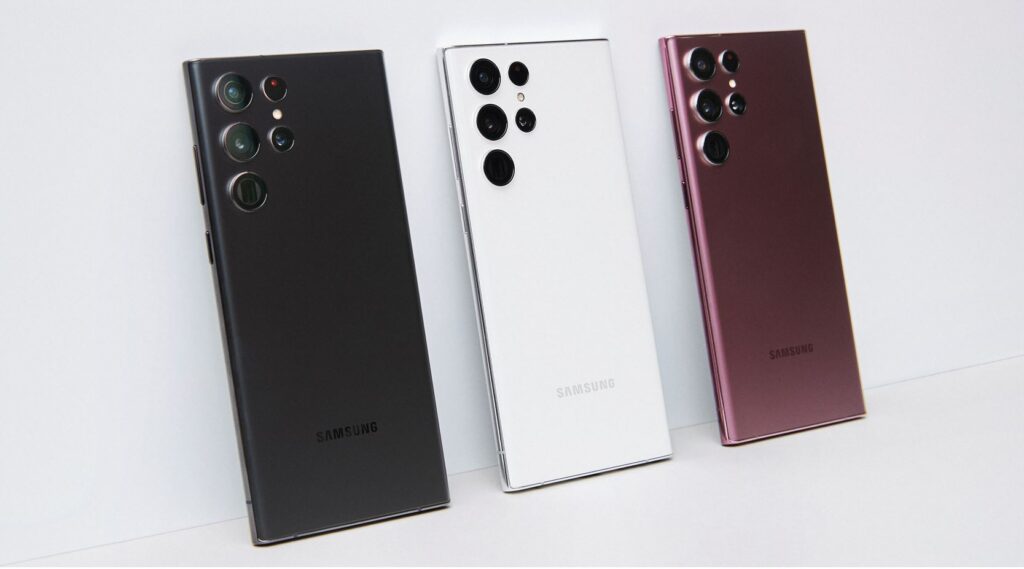 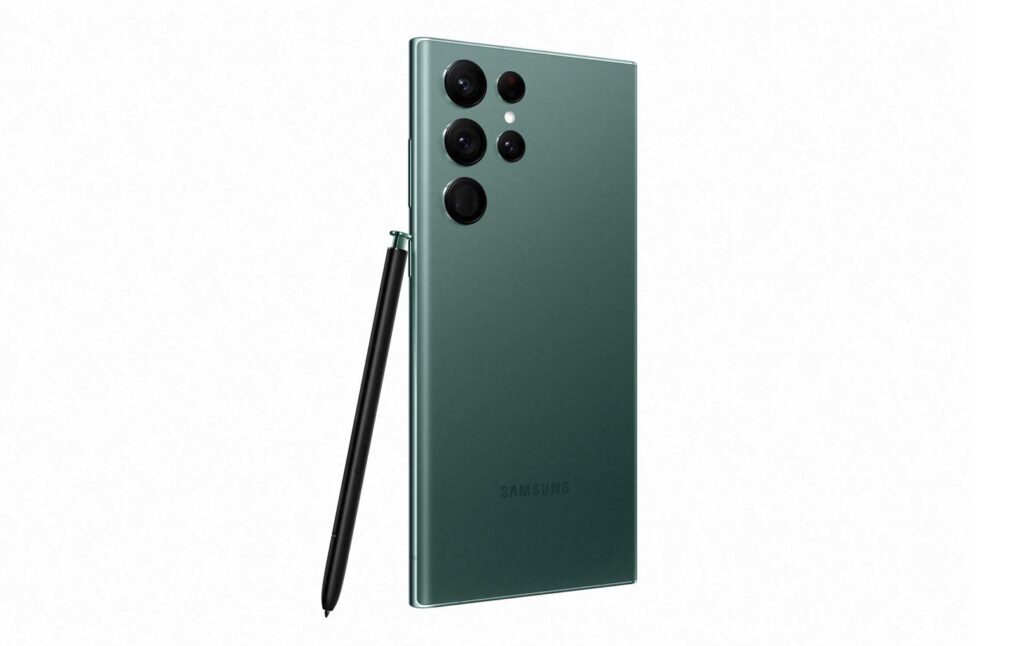 Colour choices for the Galaxy S22 Ultra run into your choice of Phantom Black, Phantom White, Green and Burgundy which somewhat resembles the more crimson version of the bronze finish of the Note20 series. Naturally, availability of colourways will vary by region.

The new S Pen stylus that is paired with the new Galaxy S22 Ultra is a more refined variant from its predecessors with lower latency and a more natural, swifter response when interacting with the display. Like its predecessors, it has  Bluetooth Low Energy (BLE) to enable it to perform gesture-based controls and act as a shutter release for the Galaxy S22 Ultra’s cameras and other selected other aspects of the phone with the stylus drawing a bit of juice off the main battery for its own built-in battery for use when stored in its silo. 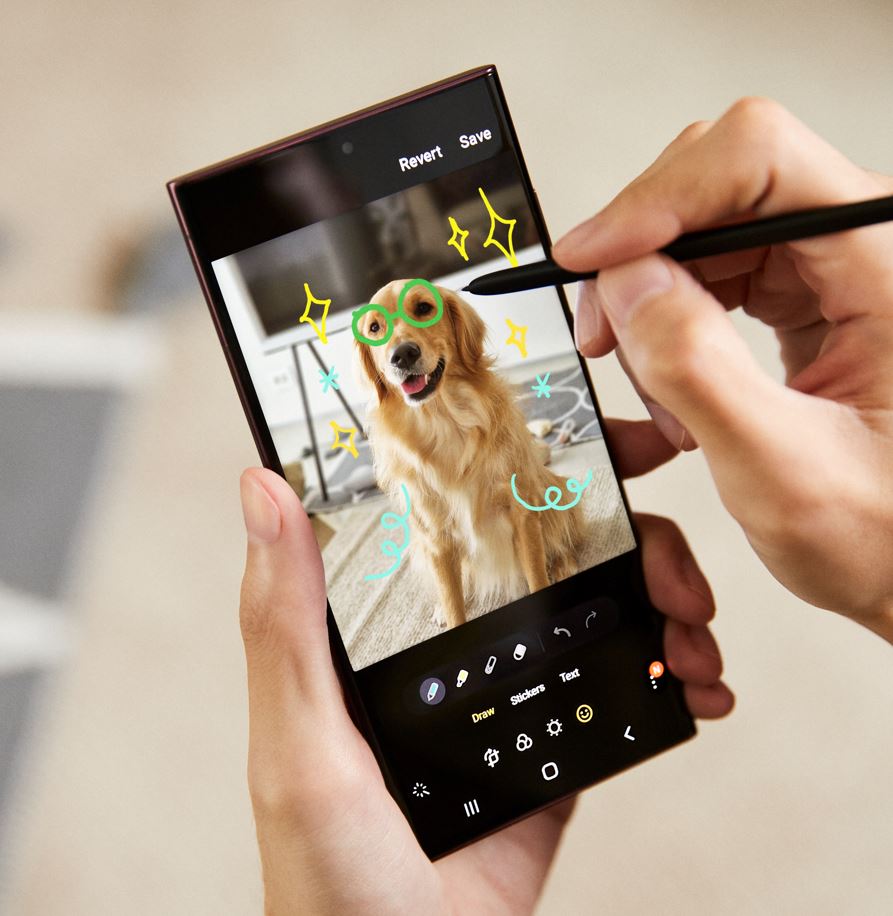 It also has significantly reduced latency this time around from 9ms to 2.8ms. The Galaxy S22 Ultra also employs AI to predict where you’re drawing on the screen much more intelligently while also making use of Wacom IC for improved writing coordinate prediction speed when doodling or writing on the display to offer a very natural handwriting experience. Naturally Air Commands is present here on the Galaxy S 22 Ultra. 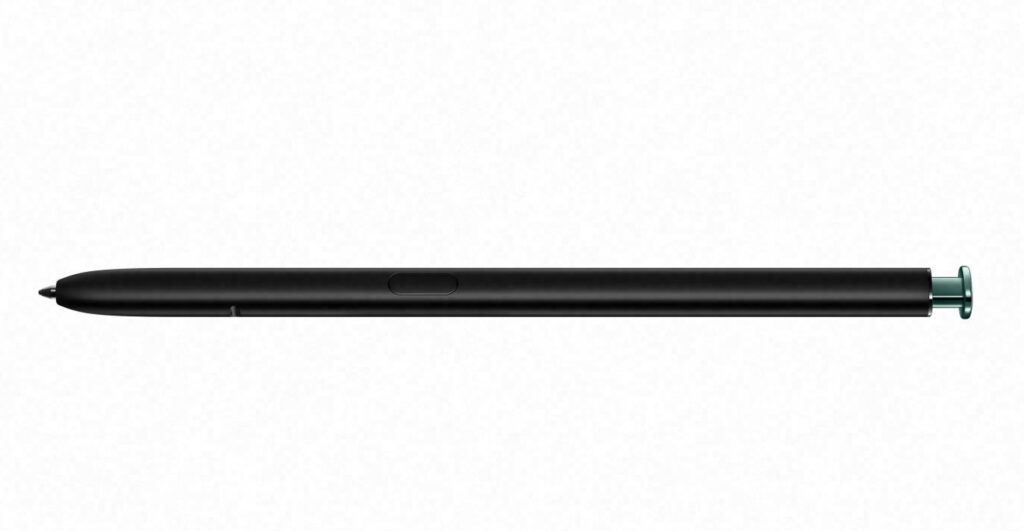 What are the Samsung Galaxy S22 Ultra Specifications

At Galaxy Unpacked 2022, Samsung revealed the Galaxy S22 Ultra specifications though the available colourways, processors, storage and RAM will, as per tradition, vary depending on region. Here’s how it stacks up summarised on a table:

In terms of display, the phone gets a crisp 6.8-inch Dynamic AMOLED 2X QHD+ curveddisplay with a 240Hz touch sampling rate in a special Game mode along with a tiny punch hole up top for the 40MP selfie camera. The Dynamic AMOLED 2X display on the Galaxy S22 Ultra also has a dynamic 120Hz refresh rate that automatically swaps between 1 – 120Hz depending on what applications are used onscreen.

Where it exceeds its predecessor the Galaxy S21 Ultra though is that it has Vision Booster tech for the display, which means that you’ll get excellent colour rendition regardless of ambient and screen brightness with the display itself offering 100% DCI-P3 colour gamut support, a peak brightness of 1,750 nits and an impressive 3,000,000:1 contrast ratio. Rounding things off is an ultrasonic fingerprint reader at the lower quadrant of the display.

Depending on region, Samsung will use either their own Exynos 2200 processor or the Snapdragon 8 Gen 1 processor, both of which are built on a 4nm process and which have 5G connectivity as well as WiFi 6E, Bluetooth 5.2 and Ultra Wide Band (UWB) support that enables it to work with selected bits of Samsung kit like their SmartTags.

The phone also has an enhanced software algorithm that optimises battery drain by analysing usage on the phone and intelligently detecting small time gaps without usage especially when gaming to save up to 30% power from WiFi usage without affecting performance.

Storage and RAM configurations vary somewhat with 12GB RAM being standard for most models and in 256GB, 512GB and 1TB storage configurations. There is also an entry level variant with just 8GB RAM and 128GB of storage for the Galaxy S22 Ultra though again, availability of storage/RAM variants will vary by region.

Keeping it powered is a 5,000mAh battery with much faster 45W wired charging, 15W wireless and wireless powershare support. Unfortunately, there’s no charger shipped with the phone itself so you’ll have to find your own or use an existing one.

Of particular note and exceptional emphasis by Samsung is the Galaxy S22 Ultra’s rear quad camera array that has a configuration somewhat similar to the Galaxy S21 Ultra but with enhanced computational photography thanks to the NPU of the new generation processors which is rated to be twice as fast as its predecessor the Galaxy S21 Ultra.

It retains the large 108MP F/1.8 primary camera that has been enhanced with Super Clear Lens optics for clearer visuals, a 12MP ultra wide angle camera and double-barrel 10MP zoom camera array that has one 10MP with 3x optical zoom and another 10MP with 10x optical zoom to cover all focal distances. Combined this setup is capable of a whopping 10x optical zoom and 100x digital zoom with up to 8K video capture.

The enhanced NPU gives the Galaxy S22 Ultra’s cameras beefier performance all around, especially under low light conditions that sharpen details and reduce noise to ensure better shots such that they’ve dubbed it as Nightography. 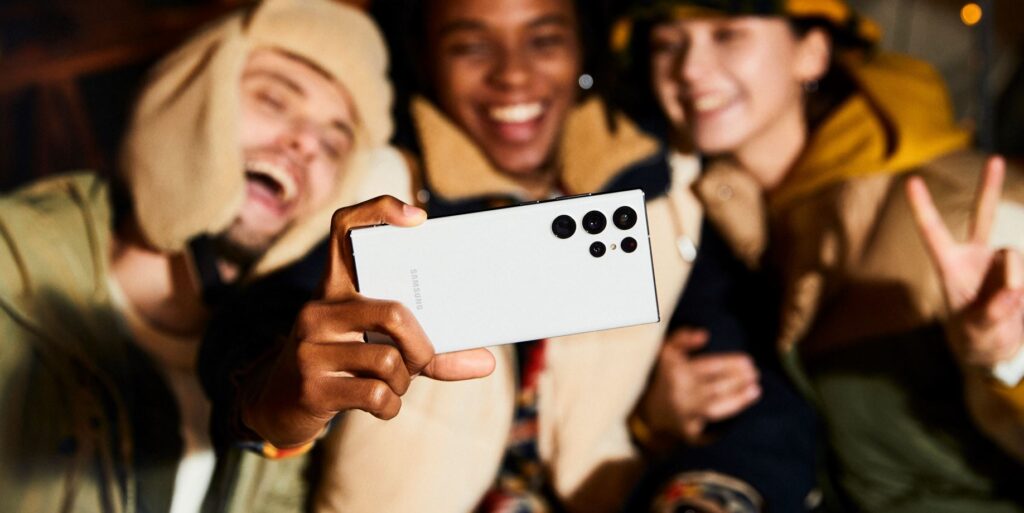 In low light shots, the AI from the NPU will reduce noise, sharpen details and synthesise image data from multiple image captures automatically at different exposures to get better quality night shots without the need for significant human intervention.

The cameras also have an Auto Framing mode which detects up to 10 faces within 5 metres and keeps everyone in focus and in frame while a Super Steady system which relies on AI in tandem with built-in OIS to handle judder even at night where it’s even more apparent.

The Galaxy S22 Ultra’s cameras also have an enhanced Portrait mode that relies on an AI stereo depth map that detects and retains small details like wisps of hair remains in focus on a subject while artfully blurring the background. It also apparently works on pets too. 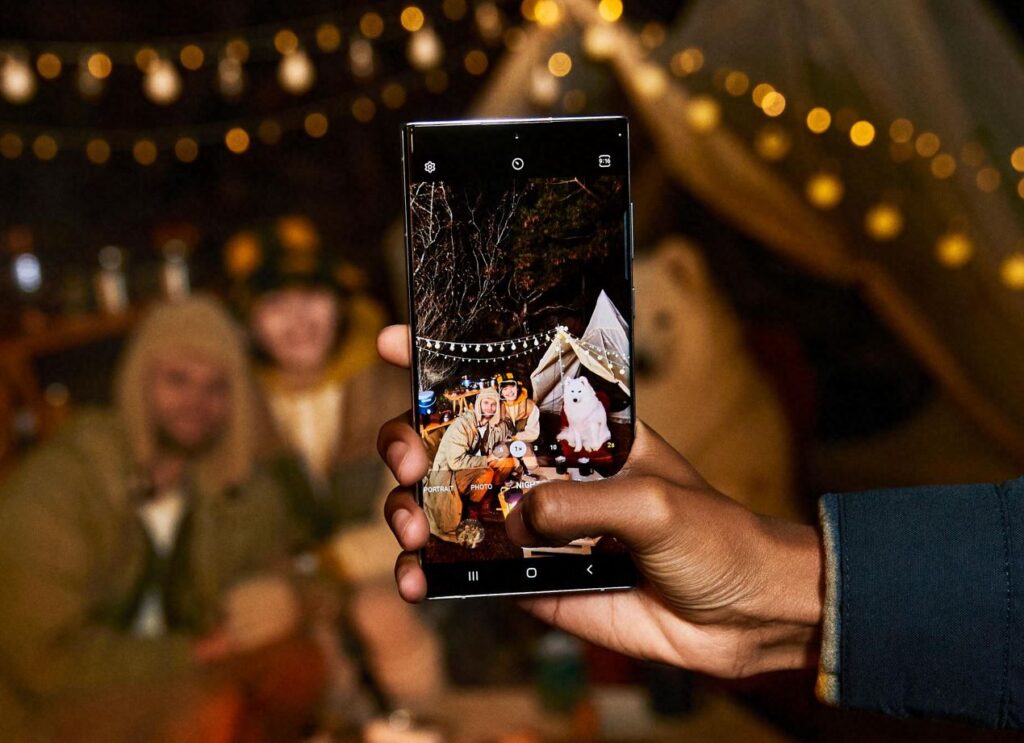 That’s not all, to cater to professionals, the phone has an optional downloadable Expert RAW app that lets you capture shots in Multi Frame RAW format for more effective post editing. All this makes it look like a powerful camera powerhouse of a smartphone indeed and field testing this should make for quite an experience.

How much is the Samsung Galaxy S22 Ultra? 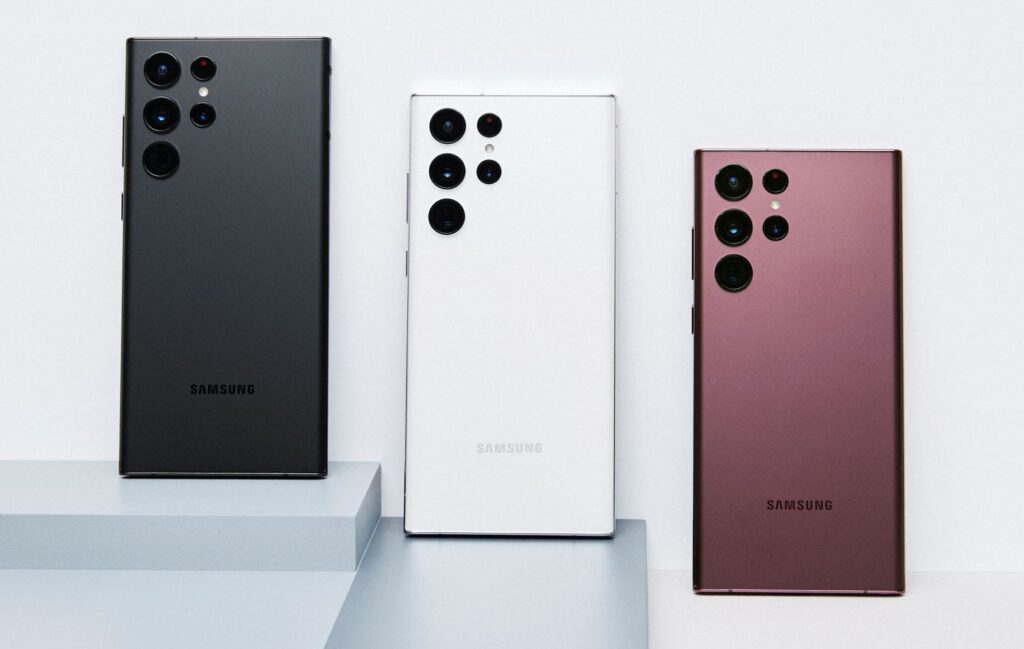 As mentioned, there will be four possible colourways as well with Phantom Black, Phantom White, Green and Burgundy available as announced at the global launch.

Samsung Malaysia has just revealed the preorder specials and details for Malaysia which you can check out at their official page at https://www.samsung.com/my/smartphones/galaxy-s22-ultra/buy/